As reported earlier this week, Mr. 305 is featured in the December issue of the South Florida magazine, City & Shore. In the issue, Pitbull discusses how he’s mastered the music business, why he doesn’t worry about other people’s opinion, and what his New Year’s Eve show means to him.

Read the article written by Greg Carannante for City & Shore Magazine below.

IF the swanky force of nature known as Pitbull represents anything – and he makes it his business to represent a lot – seems to me it’d have to be this one thing:

So, could there be a more perfect hookup for the Miami/global celebrity who personifies in-your-face fiesta than the signature SoFla holiday boat blast? On Dec. 10, the rapper who’s made a career of collaborations scores another as Grand Marshal of the Seminole Hard Rock Winterfest Boat Parade, billed as “The Greatest Show on H2O” and – how Pitbull is this? – “The World’s Most Watched Boat Parade.”

Pitbull’s mashup modus operandi is about more than entertainment though. It’s an ethos of conglomeration that he’s leveraged into a brand – a bankable alchemy that fuses both “Mr. 305” and “Mr. Worldwide,” raucous high-living and serious business, hip-hop and dance music, Cuban ancestry and American dream, rap lines and melodic hooks, street cred and entrepreneurial prestige, Latin rhythms and club beats, tuxedoed sophistication and barefaced booty-shakin’.

“My philosophy is that in order to be a great brand, you have to be associated with marquee brands. Hard Rock is that and then some,” he told City & Shore last month, explaining his Winterfest appearance on the heels of his show at Hard Rock Live on Dec. 9.

Indeed, Armando “Pitbull” Pérez has branded himself with a tenacity resonant of his stage name. According to ex-Sony Music honcho Tommy Mottola, he “has used his branding opportunities more wisely and effectively than any artist in the music industry.”

“What most people forget is that this is the music business,” Pitbull says. “I like creating an enterprise and partnerships around the music that I create.”

How do those commercial pursuits jive with his street roots?

“I don’t worry about other people’s opinions,” he says. “I know my history and my life. Those experiences are in my DNA. If you don’t know who you are, you’ll never know where you’re going.

And where he’s going, basically, is “going for it” – that’s the translation of his signature Spanish phrase and Grammy-winning album title, Dale. The 35-year-old son of Cuban immigrants already boasts an imposing portfolio that includes his After Dark clothing line, Voli Vodka and an eponymous fragrance – not to mention his own brand of slot machines. He’s also endorsed Pepsi, Dr Pepper, Bud Light, Fiat, Dodge, Norwegian Cruise Lines and Walmart. He has a television production company, a SiriusXM radio channel and aspirations, as he’s said, to eventually “have a family [business] like the Bacardis.”

In his typical mix-and-match style, he is brand ambassador for both Playboy Enterprises and SLAM! charter schools (standing for Sports, Leadership, Arts and Management), which are operating in Little Havana and West Palm Beach and approved for Broward.

“SLAM! is being replicated throughout the country and the world,” Pitbull says. “Our goal is to bring this academic environment to as many underserved students and families as possible.”

And then, of course, there’s the music – the first fruits of his collaborative spirit – a succession of hits whose titles are tagged with the parenthetical “Featuring….” Such A-list artists as Gloria Estefan, Christina Aguilera, Jennifer Lopez, Shakira and Enrique Iglesias have helped Pitbull compose the resume of a global megastar:

Over 70 million singles sold, with No. 1 hits in more than 15 countries.

His oft-delayed 10th studio album, Climate Change, is due next year, and it will add one more tour for the man who – not for nothing – calls himself “Mr. Worldwide.” He’s already performed for millions of people in over 50 countries.

“By traveling the world, we have been exposed to different styles of music from all corners of the globe,” he says. “That gives us a unique opportunity to continue finding ways to blend my music with theirs and, in the process, continue to create truly global music.”

But for all of his global success, he says what has meant the most is bringing it all back home with his Fox-TV specials, Pitbull’s New Year’s Revolution.

“Having my own nationally broadcast New Year’s Eve show in the town I love the most – Miami – performing at one of the parks I grew up at – Bayfront Park. It’s a true honor!” 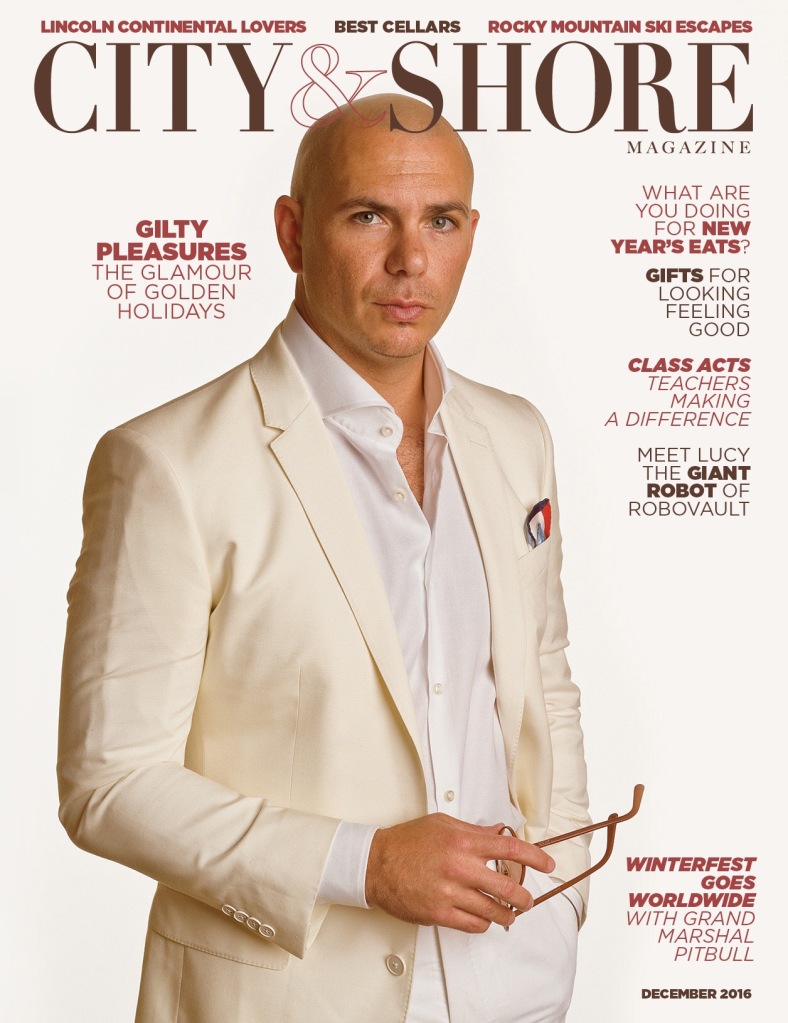 The December issue of City & Shore magazine is now available in print, online, and on the iPad AppStore.